Okay, this one is more a “People” post directed towards some thoughts that have been rolling around in my head lately rather than a specific person.

Kind of heavy for a public blog post, but hey! These are the kinds of things I think about, for better or for worse. Next post will have more levity, promise. 😀

“Forgive me,” He whispers to me in low tones, “I don’t mean to be happy.”
How can he, when the one he hates is himself? He says that its easier this way, because it grants him an excuse. He looks for brighter avenues because that’s what people say he should do, but consoles his wholly failed half-measures with the reprieve of being hated. To him, his daily defeats are wounds only bearable because he knows he has already failed. He sits in a little hole dug by his hatred, face buried in his arms so the rocks tumbling into his pit hurt less.

The one he hates is himself.
A comforting sureness of who he is, in one pair of eyes at least. He hides behind this ugly excuse, crouching lower so as to let the hatred smother him faster.

“Forgive me.” He says to the world
“I don’t mean to be happy.” He cries into his arms.
But he’s forgotten that the world doesn’t give a shit. He won’t be glossed over. He won’t be forgotten, forgiven, have nothing expected from him just because he is hated. His pit is a pothole, and he will naturally be run over if he insists on sitting in the middle of an avalanche.

I want to shake him from his dark reverie, tell him to take one step–just one step!–out of that hole. But I know that the walls of his prison stretch high, and this yawning cavern only echoes back his ironic fear of the world outside. He insists on staying.

It is not my place to tell him what he needs to do, I know that. It is also not my place to assume that I know what is best for him. But I do so want to see his face, the original–unhidden by tearful creases and shadowed hatred.

I started writing this one 8 months ago, but never really found the inspiration to finish it. For some reason, inspiration is hitting me like a hailstorm today, so here’s the finished piece.

Also — Checkout this cool photo I took when we went hiking! 😀

I couldn’t understand her the first time we met. She was loud–so loud, and her laughter bounced like a bowling ball across the nervous tension of that room filled with complete strangers. The way she spoke had a curious lilt, her sentences always rushed towards the periods like she was scared they wouldn’t have a chance to be spoken fully. She spoke a lot, and listening to her talk was like listening to roller coaster scream down a metal track.

Three years ago, I could recognize her voice from a mile away just by the sound of wind whistling past her words. People here are nicer than most, they remember to drop the stones they hold instead of throwing them at things they don’t like. Despite that, she used to cause people to pick up an awfully many number of rocks. I remember wondering why she never noticed all those stony stares and pained laughs scattered around her path.

At one point, I asked her if she tripped a lot when she walked.
“Oh, I do.” She had laughed, meeting my slanted gaze with confidence. “But I don’t mind it now.”
“Why?”
“I’ve learned to like myself.”

A cliche one-liner from the mouth of any other,  but I knew her words were formed by the kaleidoscope of purple bruises on her shin where she had collided with those dropped rocks. Her answer struck me like a knife. At that time (maybe even now), the thought of liking myself felt like a lonely dream. I remember this single moment as the one when I thought that we just might be able to be friends.
“Why?”

She responded slowly, quietly, so as to make it clear that the words she spoke next were important.
“Because if I don’t, how can anyone else?”

She tells me that she feels like a circular puzzle piece.

And though I know she’d never tell me why, I have a pretty good idea of the reason anyways. She yearns for his love, and brandishes an eraser as proof of her dedication.

“I like girls that are nice” He says, so she demolishes the castle of her convictions and redraws her beliefs in sand.

“You have nice smile” He says, so she pulls the edges of her tears into those upward crescents, smiling, always smiling.

I tell her she’s over-reacting. “People say that stuff all the time.”
She smiles back, “I know.”

But she doesn’t. Her soul has no edges, she’s blurred away anything that could possibly maim his perception of her virtue. People say that lovers are puzzle pieces that fit together prettily. How does a circle fit with anything?

I never know if I’ll have to wear a helmet when I talk with him. Sometimes, his haphazard words fly like bullets, pelting the air around him with the staccato of indifference. Sometimes his words are exactly what I need,  a sharp jab at the side to pull me back together.

I don’t know if he can feel the thumbtacks spilling out of his mouth when he speaks. Even though he’s mastered positioning the tacks so the sharp ends shoot straight out of his mouth instead of poking him, I know the pins prick his cheek anyway. I wonder if he winces at blood pooling in his mouth, wishing he could speak in feathers.

When he’s careful, his thumbtack arrangements are almost art. He can pin anything together, be it art, ideas, people, dreams. Sit down for a moment with him, and he can arrange fuzzy dreams into color. Come with a broken heart, and he can pin it back into shape. I love watching him talk, watching him pluck ideas from the air and mounting them to reality.

When he’s not careful, he spills his thumbtacks everywhere. He says he doesn’t mean to, but every time he opens his mouth he pours another box of tacks over my head. One cut is nothing, but a hundred little cuts smolder for the next week as I quietly water the fire in my heart with tears. I’m not the first. He will never see my tears, but I wonder if he’s ever watched someone cry with his thumbtacks pinned to their bleeding chest.

He speaks in thumbtacks. And though I know it’s important in keeping everything together, sometimes, I wish he would speak in feathers.

I haven’t taken a photo of a sunset beach yet, but I do have this pretty one of sunset on a mountain! Hope it’ll suffice. 🙂

She reminds me of home. Not my home, or her home, just the idea of “home”. She can talk for ages and I can sit for just as long, basking in the drama of her escapades. As I’ve gotten to know her better, I’ve realized that a few of her stories are tinted blue. When she tells them, I can almost hear the way the words tilt towards the past.

Sometimes, I can catch a glimpse of her soul between the syllables of her tales and the sound of her laughter. It’s exactly the way the ocean bends sunlight at dusk. I’d like to keep looking at the glitter on the horizon, the seafoam on the shore, but the glimpse lasts only a moment before I’m reminded that sunset means its time to return home.

I think, perhaps, she likes the peace of the empty twilight beach, which is why sunset is so clearly demarcated in her stories. So, when she begins to speak with those notes of sunset playing against her breath, I know it’s time to leave her home for mine. 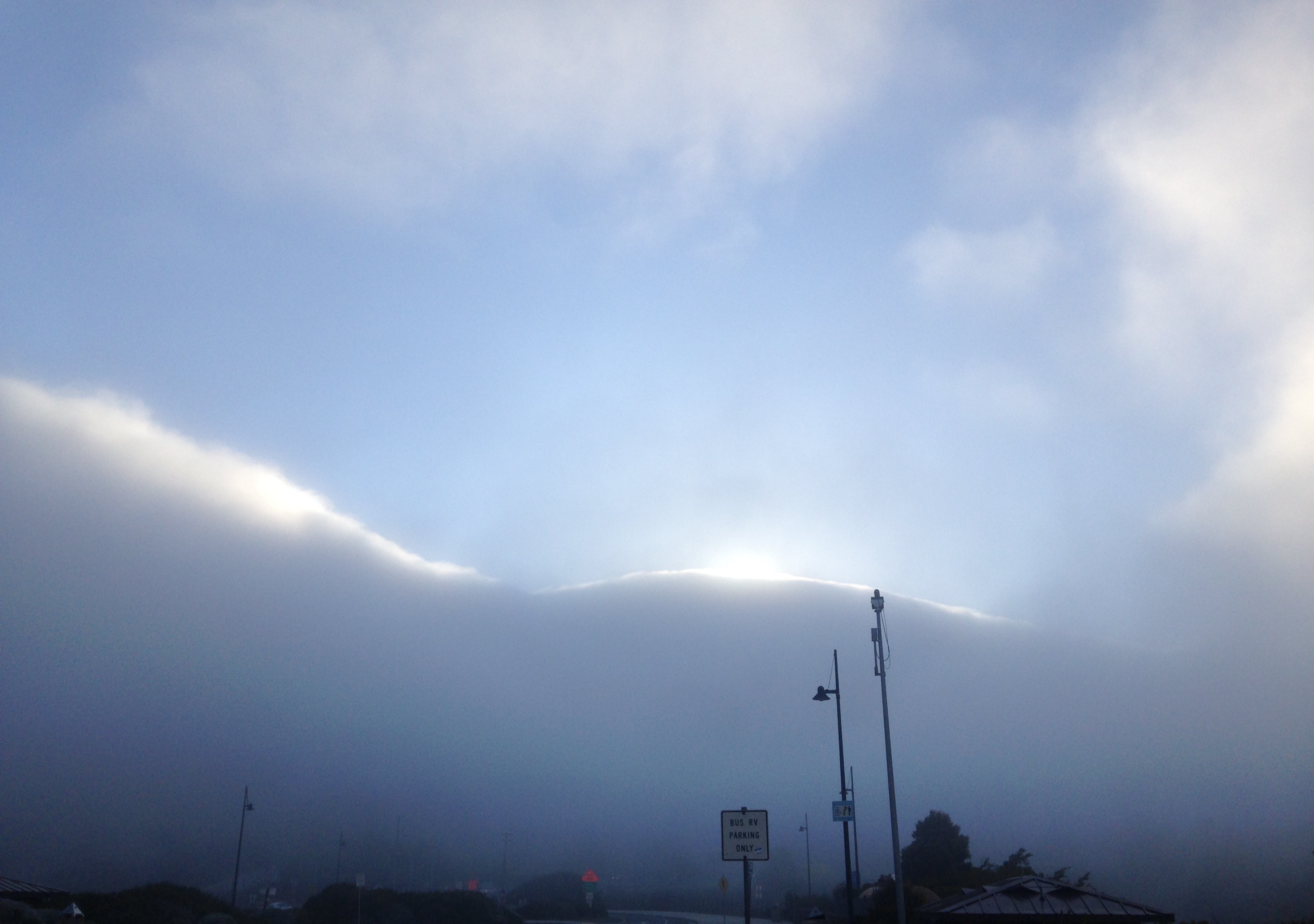 I thought it’d be fun to challenge myself to writing every once in a while, even though I don’t really have much to say. So here’s the idea: I’ll pick one person that I know, either personally or tangentially, and write a short passage on them.

The first time I saw him, I had to blink twice because it was almost like he wasn’t there. He was dressed in all black, but I felt like he was see-through. Though he sat in the corner of the cafeteria with his book and his lunch, he was somewhere beyond the quiet din of the college campus.

I wanted to approach him, to see if he was lonely and wanted to chat, but couldn’t find the right words to use. He looked happy enough by himself, though I couldn’t understand why, so much so that my voice felt out of place in his world. As the year passed, he and his book would become a fixture of that corner, as much a constant as the six clocks on the back wall of our cafeteria.

Once, we called him over for some homemade seafood soup. We had to ask twice, because the first time our words drifted away before they could reach him. He came back with a bowl, wordlessly filling it while scooting into a waiting chair. As I watched him eat, all the questions I wanted to ask came floating up.
“What are you reading?”
“How are you doing?”
“Are you lonely?”

However, the wind was blowing him away from me, whipping the questions from my mouth before I got a chance to speak. I wanted to tie this enigma down so I could understand him, but I passed right through him. He was bound by nothing, could be affected by nothing, seemed impervious to this world and all it’s implications. His only variable was a wind, invisible to everyone, yet urgently pushing him towards a future that’ll forever remain a mystery to me.

Me WordPress Theme by themehall.com