Because I’m an interesting person and Astronomy is interesting, I’m currently taking it as a class! 😀

Try this one for size (haha, see what I did there). Is this the Universe, or your brain?

I’ve learned a lot, but will save the rambling for the future. For today, let’s focus on just one topic– the age of the universe.

It’s difficult to gather information in space, because things are so far apart. We are observers, nothing more, and must be content with what circumstance is willing to provide. One of the most obvious things we can observe is light. Things emit light, and there are things out there in the sky that we want to see and measure. Thanks to the esteemed Albert Einstein, we know that light travels at the speed of

. Given that this is a finite speed, interesting things happen to light when traveling across long distances.

By looking at the location of absorption lines, we can figure how how much red/blue-shifting has occurred. Consequentially, we can then infer the velocity of the light source.

Similar to how sirens sound lower in pitch when the sound source is heading away from you, the Doppler effect causes light to redshift when the light source is moving away from us. (Ahem, redshifting occurs when the light wavelength is lengthened because of the source moving away from the observer.) By measuring the magnitude of the red (r) and the redshift (z), we can determine the distance a light source is from us, and the velocity of it’s movement. Galaxies are pretty great light emitters, and we can definitely find the distance of velocity of a galaxy given r and z.

Our class did just that together using this site, and it resulted in this graph:

The yellow line represents the approximate line of best fit I drew for this chart. Notice that as the distances get farther away, the velocities are no longer following the linear relationship. This is likely due to the inaccuracy of data as distance increases.

Due to Hubble’s law, we know that

is Hubble’s constant. Since it’s a linear relationship, we also know that

is just the slope of the line between the x and y axis of the graph above.

By taking a line of best fit, we can estimate that

The constant relates the distance of the galaxy with the speed by which it’s moving away. Given that it’s a positive, >1 constant, it implies that galaxies farther away from us are moving faster. I guess they don’t like the Milky Way because we smell funny or something :,(

Anyhow, now that we know the relationship between speed and distance, we should be able to calculate the point at which this all began. The Big Bang!

This is 7th grade Physics.

This is 5th grade Algebra.

And since Hubble’s constant describes this time t, we can then state:

Thus, the age of the universe is simply the inverse of Hubble’s constant.

But we need this to be in terms of years, so we’ll need to do some unit conversions:

That’s pretty darn old. Comparatively speaking, the Earth is only 4.9 billion years old. The earliest skeletons found ever are 200,000 years old. They next time your Mom complains about feeling old, pull that statistic out of your pocket and tell her she’s just as young and beautiful as always. <3 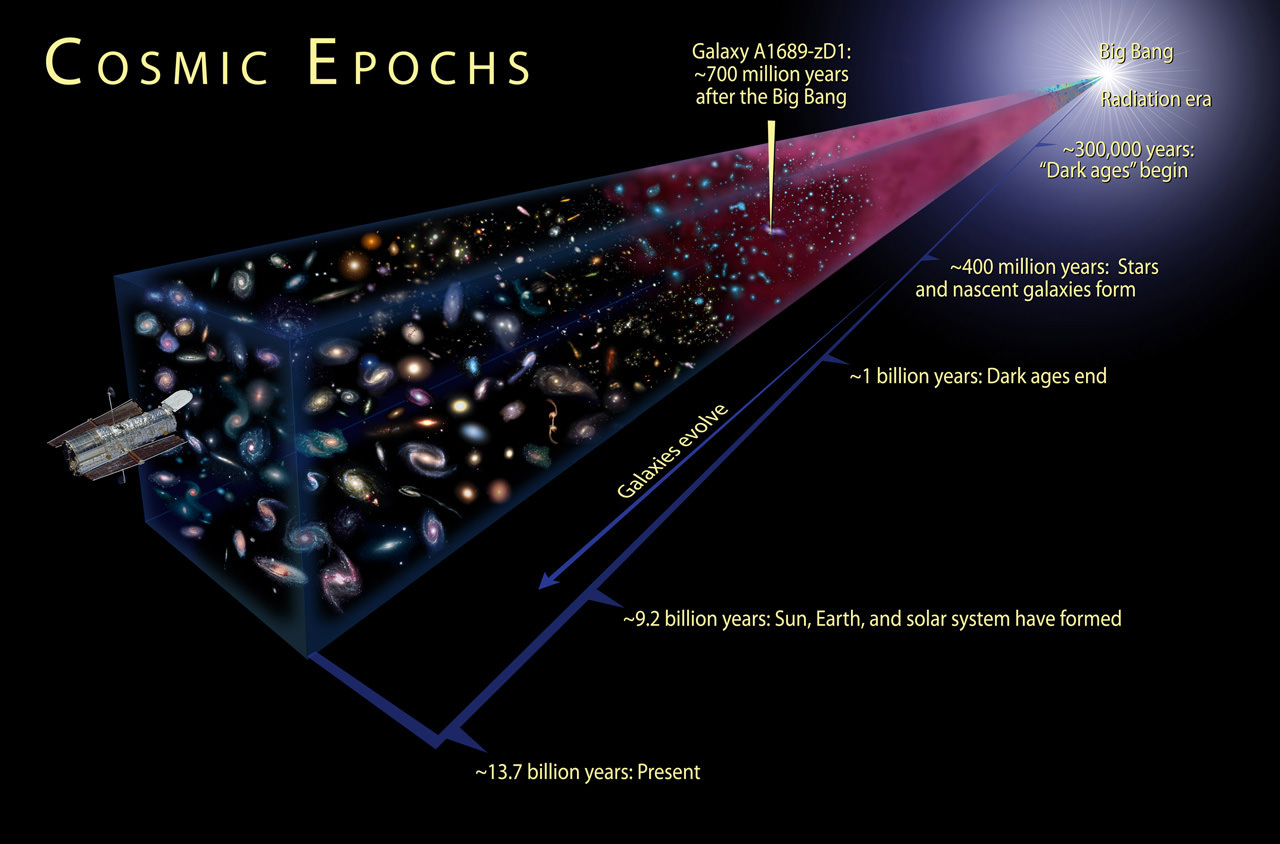 Here’s a neat looking picture that shows the progression of the universe. Everything we know about humankind can’t even fit scale-wise on here. :O

P.S: Of course, this age calculation is based on data collected by the class and a rough line of best fit estimation. The Hubble constant is actually closer to 22km/s/MLY. That would mean the age of the universe is about 13.7 billion years.

Me WordPress Theme by themehall.com